GAA IN THE COLAISTE:
Gaelic football is a sport that we are very passionate about in The Coláiste. In the schools short existence, we have been very successful across all grades. The Coláiste competes at various grades in both boys and girls competitions, 1st year, under 14, under 16 and the senior teams. These teams are open to anyone willing to anyone willing to put in hard work and training and at school games and anyone can come along to play.

SUCCESS WITHIN THE COLAISTE:
Although Coláiste Na hInse is a new school we are always very competitive across all the competitions. In recent years the school has won two North Leinster Titles and other Competitions and blitzes within the county. We are constantly striving for more success and in the coming years we hope to bring even more silverware back to the Coláiste.

GAELIC SUCCESS OUTSIDE OF THE COLAISTE:
Gaelic success is also something which takes place a huge amount of the Coláiste. Our local club St. Colmcille’s made it to the Division 1 County Minor Final this year narrowly losing out to St. Peters Dunboyne with many of these players representing the school at senior level. We have numerous players on the under 15 and 17 county Meath development squads as Jordan Browne and James Conlon on the 2015 Meath Minor Football Squad. The St. Colmcille’s ladies were also successful this year winning the U13 championship and the St. Pats Ladies Minors were also victorious with a hard fought win over rivals St. Colmcille’s in the final.

GAA COACHES IN THE SCHOOL:
The coaches in the Coláiste all put their heart and soul into helping the teams win silver wear each year. Their dedication behind the scenes and want to win helps to drive the teams on each year. I. O’Connor, I. Kelly, Mr. Ó Murchu, Mr. Hanley, Mr. Coffey, Mr Bree, Mr. O’Shea, and Mr Reilly pride themselves on how successful their teams are each year and their knowledge, passion and experience in the game is hard to come by many in other schools. Mr. Reilly has played inter county football for the past 10 years and has captained the Meath Senior football team 2013-2015. He has also represented Ireland at International Rules from 2006-2011. Mr. Bree has won an All-Ireland Club Championship with St. Vincent’s and is currently playing with Sligo Senior Football team. Mr. O’Shea has played for Cork at various levels and has won a Sigerson Cup with DCU during his time there. 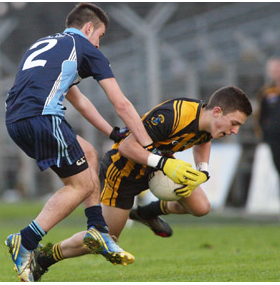 Adam Lynch representing his club and playing full back for the school team.

James Conlon playing for Meath and representing the school team.